The 307 “Lviv Eagle Owls” Night Fighter Squadron was one of the 15 airborne squadrons of the Polish Armed Forces in 1940-45. They fought against Germany and Italy defending Great Britain (the Battle of Britain), in North Africa and Italy, in France and Western Europe, and took part in the Allied bombing of Germany.

The code letters of the unit were EW, and turquoise scarves were a characteristic addition to their uniforms. Most of the personnel came from the 5th and 6th Air Regiments of the Polish Army of the Second Polish Republic. As a tribute to the traditions of the 6th Regiment (whose home garrison was Lwów), the squadron took the name “Lviv Eagle Owls.” The first combat aircraft was the English Boulton Paul Defiant two-seater fighter. By the standards of the era, it was a bizarre design and disliked by aviators. After a month, the “Eagle Owls” received new equipment – the Bristol Beaufighter heavy fighter, first the Mark IIF version, and later the Mark VIF. It was a very heavily armed plane (four 20mm cannons, six machine guns, bombs and rockets), fast, durable and with a long range. The squadron completed its training on December 3, 1940, and entered night patrol duty in the Liverpool and Manchester areas. On the night of April 11-12, 1941, the ”Eagle Owls” achieved their first, certain victory. The crew, consisting of pilot, Sergeant Kazimierz Jankowiak and Sergeant Gunner Józef Lipiński, shot down a German He-111 bomber.

At the end of April, the squadron was moved to the Exeter area. An epic battle between four crews of “Lviv Eagle Owls” took place over the city on the night of May 3–4, 1942, against a formation of about forty German bombers. Despite the ten-fold advantage of the enemy, the Poles repelled the raid and saved the city. Another armament upgrade came at the end of 1942. The Beaufighters were replaced with De Havilland Mosquito heavy fighters – initially in the Mark NFII variant. The new planes were also heavily armed, but also faster, much more maneuverable and… made of wood (the fuselage was made of a special plywood). The “Eagle Owls” began to fly the Mosquitos over Germany, hunting for enemy planes over their airfields. In August 1943, the squadron was moved to Cornwall, from where it conducted flights over the Bay of Biscay. In November, they moved again, this time to Drem near Edinburgh, from where they carried out night patrols over Scotland. The next stages of the “Eagle Owls” journey were Sumburgh in Shetland. In 1944, the squadron patrolled around Iceland and over the North Sea. It also made harassing flights over Norway. In August, the “Eagle Owls” moved to Coleby Grange, from where they protected Hull and London. They also flew over France, Belgium, the Netherlands and Germany, escorting bombing missions and attacking ground targets. On September 17, 1944, the squadron took part in covering the landing at Arnhem (Operation “Market Garden”). The last victory of the “Eagle Owls” was achieved by the crew of Captain Czesław Tarkowski and radio navigator, First Officer K. Taylor (an Englishman), who shot down a German Junkers Ju88 in the Bonn area on March 7, 1945. The 307 Squadron was disbanded on January 2, 1947 in Horsham St Faith.

The majority of 307 Squadron’s personnel came from the pre-war Polish military aviation. Most of the pilots did not return to Poland occupied by the Soviet Union.

The anthem of 307 Squadron consists of 6 verses, separated by a twice-repeated chorus. The first verse tells about the journey of the airmen (“we, gathered from round the world”) who “from round the world” gathered to fight the Germans again. Also in this verse, the song already refers to the tradition of Lwów and the 6th Aviation Regiment (“Our tradition is the city of Lwów”). The second verse is a call to fight the enemy at night.

The chorus is the song of the night-fighting “Lviv Eagle Owls,” who go “to prey.” The third verse reminds us of an “ancient, racial dispute” (Polish-German) that the “Eagle Owls” settle in the night sky. The fourth verse expresses the joy of defeating the enemy (“Because a dead German is not bad). The fifth verse is a reminder of the purpose of fighting – for country and family. The last part of the song expresses hope for a victorious return to the country.

This is a collection of motifs typical to the Polish military song – the wandering of exiles, battle, willingness to sacrifice, love and hope. Unfortunately, the wish contained in the hymn did not come true. After the end of the war, most of the “Eagle Owls” could not return to Poland due to the repressions of the communist regime. 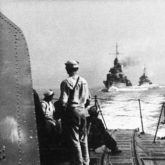 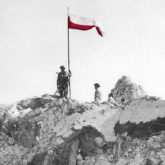 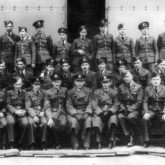 Group photo of the Lviv Eagle Owls (Exeter base, December 1941) 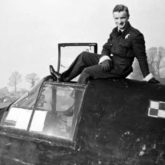 Second Lieutenant, Pilot Grzegorz Bukowiecki from 307 Squadron on a Beaufighter VIF. Exeter, second half of 1942 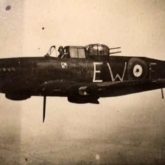 The Mosquito of Jerzy Orzechowski (standing second from right) with a pennant under the chessboard. Predannack, September 1943 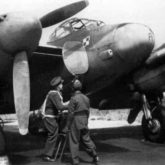 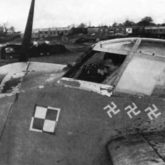 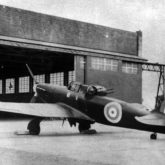 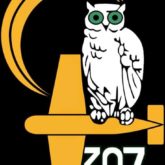 Badge of the 307 Night Fighter Squadron 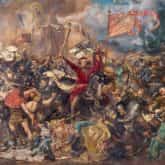 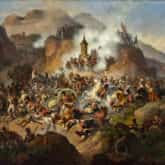 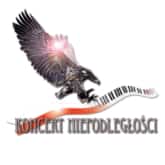